Barack Obama and the Evil Plan to Destroy President Trump 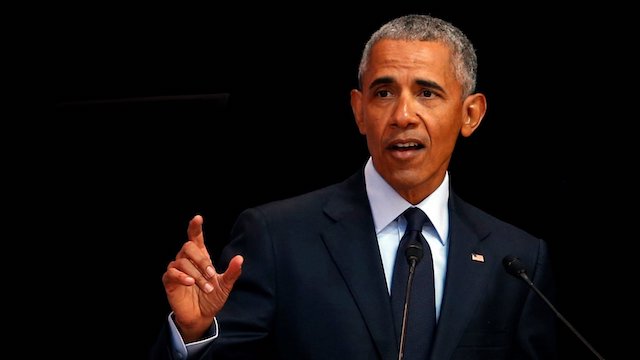 As we move toward the midterm elections, former President Barack Obama is back in the news, working overtime to make himself relevant by claiming partial credit for the Trump economic growth and prosperity. We should be alarmed because of what we know about the Obama presidency and its disregard for American traditions about elections and how one treats political opponents. There is no sense of protocol or qualms about abusing power or trampling the U.S. Constitution.

Presidential protocol once meant former Presidents showed a measure of deference and respect for current officeholders. Former President Jimmy Carter, in 2007, broke this precedent when he called George W. Bush’s presidency, the “worst in history.” Until 2007, Carter was the uncontested winner of the worst modern presidency in history. But then I digress. President Obama is obsessed with President Trump, and Obama is supported by his army of paid and unpaid protesters as seen in Organizing for Action, a pro-Obama group that will not leave the president alone.

Given the corruption in the FBI and Department of Justice during the Obama years, the unprecedented use of the institutions of government against political opponents, and the never-ending Mueller investigation, it becomes more likely than not President Obama has something to hide. From the moment Donald J. Trump became a serious threat to the leftist agenda, he was targeted with Saul Alinsky’s evil strategies.

Deception, infiltration, and manipulations are at the core of the Alinsky guide for redistributing power. Just think about America, the frenetic opposition to the president and Alinsky’s Rules for Radicals, 8, 11, and 13:

Rule 8. “Keep the pressure on. Never let up.” Keep trying new things to keep the opposition off balance. As the opposition masters one approach, hit them from the flank with something new…

Rule 11. “If you push a negative hard enough, it will push through and become a positive.” Violence from the other side can win the public to your side because the public sympathizes with the underdog…

Rule 13. “Pick the target, freeze it, personalize it, and polarize it.” Cut off the support network and isolate the target from sympathy. Go after people and not institutions; people hurt faster than institutions (see Open Culture).

President Trump and his administration have had the above tactics unleashed against them. The end goal is to keep him, so distracted he and his appointees will never have time to adjudicate any of the criminal behavior committed by the Obama Administration.

In my book, Be the People: A Call to Reclaim America’s Faith and Promise (2011), pp. 13-15, I warned of what was then the precursor of fake news. In 2010, the Obama Pentagon was pushing for authorization to create an Office of Strategic Deception to gather and disseminate information to confuse America’s enemies. Given the compromised state of the leftist media, one can only wonder if this is behind the fake news we now get from once trusted news services.

If only we had an independent media committed to truth. Alas, we seem to have a media committed to partisan politics. In Saul Alinsky style, the goal is to isolate the president, keep the pressure on him, push all the negatives, and isolate him from friends and family. It is an evil strategy born from the imagination of the man who dared to give Satan a shout-out in the epigraph of Rules for Radicals:

“Lest we forget at least an over the shoulder acknowledgment to the very first radical: from all our legends, mythology and history (and who is to know where mythology leaves off and history begins – or which is which), the very first radical known to man who rebelled against the establishment and did it so effectively that he at least won his own kingdom – Lucifer.”

Need we say more? We the People should not allow anarchists and former presidents to subvert the Democratic process. We must “Be the People” who reclaim our nation.

Previous articleBrandon Straka Says #Walkaway – We’ve Been Duped!
Next articleClaims that God is Laughing at Kavanaugh Are Laughable