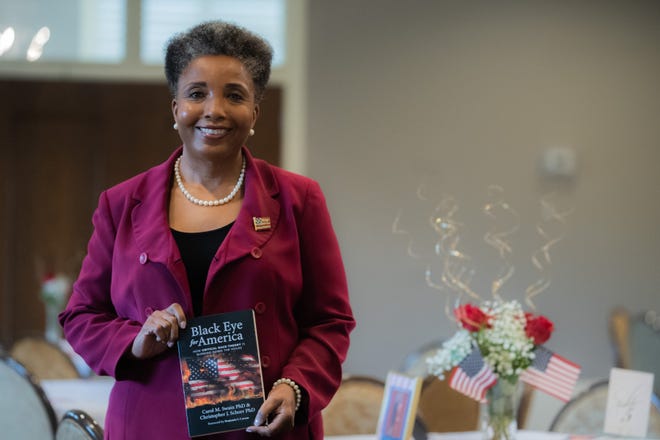 The Madison County Republican Women’s group kicked off the first of their new speaker series event in October by welcoming Carol Swain, a former professor of political science and law at Vanderbilt University and television analyst.

Swain says the poverty of her childhood shaped her early adult years.

“The poverty that I grew up in was such that all of my siblings and I dropped out of school after completing the eighth grade,” she said. “I married at 16, and by the time I was 21 I had three small children.”

Although the success rates for young mothers with low education were not in her favor, Swain managed to turn her story around.

“Part of my story is that people encouraged me,” she said. “I went through a period of my life when I did suicide gestures—I would take bottles of pills and would call someone and get rescued. But the medical doctor told me I was intelligent, I was attractive, and I could do more with my life.

“I’d never heard that before.”

That compliment–and a divorce from her husband– got Swain thinking. And then came another nudge.

“(While working a job), an African orderly told me I ought to go to college because there were a lot of people in college not as smart as I was,” Swain smiled at the memory. “And I had not known that you could go to college with a high school equivalency, so I started at the community college as a work-study student.”

Swain worked a full-time job to afford her education, which she got, in the form of a bachelor’s degree in business.

“I thought I’d be a store manager,” she said. “When I applied for the job, however, I was told I needed a four-year degree.”

Swain was not convinced though. Moving on from education, Swain tried to spread her wings, but found that the job offers just weren’t quite coming through.

“I applied for jobs, and the jobs didn’t come through, but the graduate offers did,” she said. “And so I embarked on a career to get a PHD.”

Swain earned her PHD and went on to join the faculty of Princeton and later Vanderbilt “going in with the confidence that I would get early tenure. And I did.”

Now, years later and retired from her professorship at Vanderbilt and working to bring light to political issues near and dear to her heart, Swain says that every hardship from her past led her to where she in now.

“The person I am today is very different from the person I was twenty years ago,” she said. “And the most important thing that I learned was that life is a journey. And I could see how everything I’ve done as a young person fits into what I’m doing now.

“But I look back at my life—and there are people who might feel sorry for me, going through all sorts of things,” she said. “But I’ve always been an out-of-the-box thinker. I’ve never fit anywhere. Even as a child I didn’t fit at home.”

When asked what she would say to the young people beginning the journey into the career field of education, Swain expressed high hopes.

“I would hope for young people, and others, that they would not have to wait until they’re as old as I am to get to the point where you have true freedom,” she said. “And I recognize how life is so short. We don’t know if we’re guaranteed tomorrow. It’s important for us to be true to whatever we’re called to do.