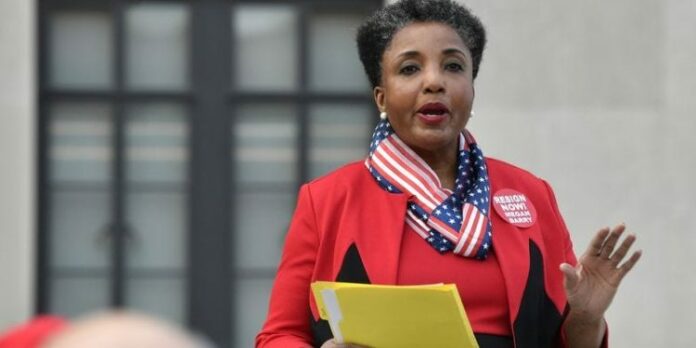 “I think we need to go back to the Equal Protection Act, the 13th Amendment, and the Civil Rights Laws because when it comes to racism and singling out White People and White Supremacy because of the color of their skin, and using that as a weapon to destroy American education, then I believe people are on solid ground when they say no to racism. And that includes the racism that is coming from the political left that will destroy the educational capabilities and opportunities for every child who is forced to be educated in a system like that,” Swain said.

Steve Bannon, former Chairman of Breitbart News and host of the podcast, called Swain a “leading thinker in the Conservative movement”, and asked Swain for her reaction to the removal of classic literature from public Education.

“The political left believes that anything that is associated with Western Civilization is dangerous and it goes back to Jessie Jackson,” Swain said, referring to some statements Jackson, a leading Community Organizer made back in the 1980s when he called for the end of Western Civilization.

According to Swain, the desire to eradicate Western Civilization from education “has been simmering within academia for a long time” since at least Jackson’s activism.

“What is dangerous now is the diversity equity inclusion industry that it has been mainstreamed in K-12 education, they have already destroyed higher education across American even at the Ivy League schools and corporations are embracing their agenda, and what it means is the destruction of education as we know it,” Swain said.

“The great books of Western Civilization will still be read by the affluent people, but the working-class won’t have access to the great leaders.  It will be denied to a lot of people,” she said.

“What is more dangerous even than the issues around the classic literature is the push to label Math as racist,” Swain said. “For the parents who think they will put up with it because the school board says we have to treat minority students in a particular, way they have to realize that it is not just minority students who are affected by this nonsense; it affects every child and teachers are being forced to teach things that they know will destroy the lives of children, but to keep their jobs they are being forced to do just that.

For further understanding of her work, consider her discussions on public policy in Education:

Vice-Chair of 1776 Commission appointed by President Trump. According to tennessstar.com, “The 1776 Commission was formed last month, one day before the election, for the purpose of restoring an accurate understanding of the nation’s founding and history.”

Swain, whose body of work is updated on Be The People News, speaks out about the decimation of the Democrat’s political agenda upon both higher Education and lower Education.

Recently she deconstructed the “hot button” topic of Critical Race Theory upon Education.

Dr. Swain is host of the podcast Be The People on the America Out Loud Podcast Network. Passionate about empowering others to raise their voices in the public square, she is an author, public speaker, and political commentator.