Claims that God is Laughing at Kavanaugh Are Laughable 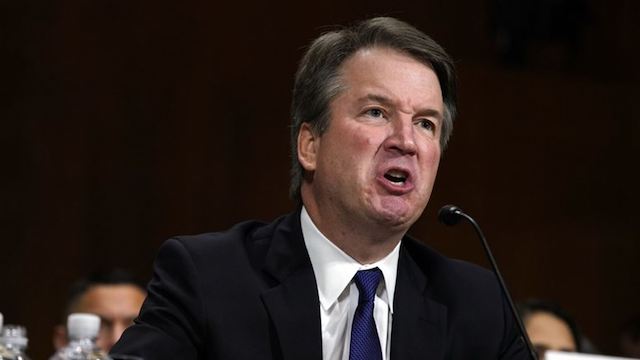 When did America’s standard of justice erode to the point where we automatically presume innocence for women who make strategically timed sexual allegations against successful men at pivotal times in their careers? Under the new “ends justify means” politics, there is no standard of proof, no statute of limitations, and no real consequences for telling politically-motivated lies. In fact, the women who make allegations against conservatives are treated like heroines. Just ask Anita Hill.

Of course, I am referring to what started off as a vicious, anonymous sexual-assault allegation against Supreme Court nominee Brett Kavanaugh but has now blossomed into a full-blown allegation by accuser Christine Blasey Ford, a professor of clinical psychology at Palo Alto University. Her anonymous accusation made in a July letter to Senator Diane Feinstein is now part of a desperate effort to kill the Kavanaugh confirmation.

The political left is full of glee at the prospect of bringing down one of President Trump’s Supreme Court nominees. So much so, that John Harris, editor-in-chief of Politico, decided to bring God into the debate in an article titled “Why God is Laughing at Brett Kavanaugh.” The subtitle of the smug and self-righteous screed was “American Politics is about power, not principle. If anyone should know this, it’s Brett Kavanaugh.” Harris goes on to list a litany of complaints against Kavanaugh and seems to regard the turn of events as just desserts.

God is definitely not laughing at the turn of events. Satan might be laughing his head off at the Democrats’ antics.  However, the Judeo-Christian God finds no humor in false accusations (John 8:44; Matt 15:19). In fact, God outlined through Moses a standard that once governed American jurisprudence: the presumption of innocence.  Until fairly recently, a person accused of a crime was presumed innocent until proven guilty. What was God’s standard of proof? The victim’s claim had to be supported with evidence.

According to Deuteronomy 19:15 (ESV): “A single witness shall not suffice against a person for any crime or for any wrong in connection with any offense that he has committed. Only on the evidence of two witnesses or of three witnesses shall a charge be established.”

Harris argued that God’s sense of humor can be seen in “the turns of fortune on display this past weekend”:

“It is on this point that the cosmos may be having a laugh not just at Kavanaugh’s expense but at many other people’s. After decades of competitive moralizing and situational ethics—in which every accuser in due course becomes the accused, and anyone riding a high horse can expect to be bucked off—even the concept of fairness in American politics seemingly is defunct.”

Ford’s allegation against Kavanaugh does not meet the high standards established by the Judeo-Christian God, whose laws have greatly influenced the American culture and its judicial system. Under the Left’s new rules, a man accused of a crime is guilty unless proven innocent. No good can come from a situation where there are no witnesses, no clear date of when the alleged crime occurred, and plenty of reasons to lie.

What we are witnessing is Saul Alinsky tactics deployed against yet another conservative Republican. Saul Alinsky is the author of “Rules for Radicals,” a book whose epitaph gives a shout-out to Lucifer. It is the playbook of the radical left. It also helps to explain the resistance movement to destroy President Trump and the people who share his more conservative vision for America. Of Alinsky’s 13 rules, the ones below are more frequently used to destroy individuals. Their effect depends on the willingness of the media and Republicans in power to play into the hands of the Alinskites by rewarding them for their bad behavior.

Rule 8. “Keep the pressure on. Never let up.” “Keep trying new things to keep the opposition off balance. As the opposition masters one approach, hit them from the flank with something new.”

Rule 11. “If you push a negative hard enough, it will push through and become a positive.” “Violence from the other side can win the public to your side because the public sympathizes with the underdog.”

Rule 13. “Pick the target, freeze it, personalize it, and polarize it.” “Cut off the support network and isolate the target from sympathy. Go after people and not institutions; people hurt faster than institutions.” (see Open Culture)

Brett Kavanaugh is the Left’s latest intended victim.  Even a small delay in his confirmation vote rewards the Left and encourages similar attacks against other conservatives.

Whether it is President Trump or one of his embattled advisors, or a Supreme Court nominee, the goals and tactics are the same: Push the negatives as hard as possible, keep the pressure on the individuals, while isolating, intimidating and destroying networks of support. This is becoming a tired and worn familiar pattern of behavior. Since the American people are not fools, these tactics will eventually backfire.

The Rolling Stone false rape case and the Duke lacrosse players’s incident should be enough evidence for thinking people to question fresh reports of rape, and to discount allegations that come in the heat of a political battle from a source that has something to gain. God is not laughing at our American politics. He is rolling his eyes and saying here we go again!

Banning Divisive Concepts in Higher Education: The Next Frontier for Texas and Other Patriotic States