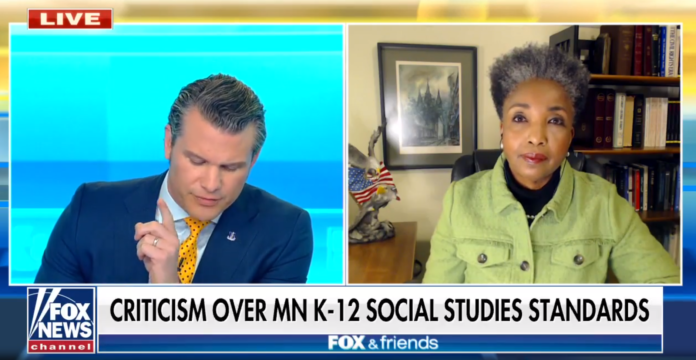 Minnesota’s potential benchmarks tout the importance of teaching concepts like systemic racism and oppression, discrimination and bias, gender and sexuality, and social justice rights and activism.

According to the standards, 9th grade students should understand that three concepts were tools used by the U.S. government to take land from indigenous and Mexican communities: whiteness, capitalism, and Christianity.

“I think every American should be concerned, because what happens in Minnesota, California, and Illinois will find its way to your state. It is introducing young children to complex ideas before they can develop critical thinking skills. [C]learly, they are being indoctrinated at the K-12 level,” contended Swain.

Minnesota’s overarching “anchor” standards explain their increased shift to perspective-based history. One of the standards asserts that students should develop an “informed and empathetic awareness” of how identity, class, and geography influence historical perspective.

Swain explained further that what Minnesota is proposing isn’t really education.
“It is a progressive agenda that advances a secular humanist ideology,” said Swain. “It teaches them, in many cases, about other religions – to practice other religions that go against Christianity. And, I don’t think we should stand by idly and allow that to happen. We know with federalism, states can do what they want – but what’s happening now is a national move.”

Minnesota’s previous educational standards made no mention of any of the social justice concepts from this latest proposal.

Hegseth then asked for Swain’s thoughts on Oakland, California Mayor Libby Schaaf’s plan to give $500 a month for 18 months to low-income households – but only if they’re BIPOC (Black, Indigenous, People of Color).

Swain predicted that this plan would end as soon as someone stood up to it in a lawsuit.

“It’s clear to me and anyone that has looked at the law that this would be a violation of the Civil Rights laws that we have on the books, as well as the Equal Protection Clause,” said Swain. “They can put these programs in place, they will survive until there is a lawsuit that goes before a judge that follows the law.”

Hegseth inquired what mindset could’ve possibly produced a plan like Oakland’s. Swain explained that these policies are an outgrowth of our educational system.

“I would just say that the colleges and universities have turned out people who can’t think, and it is reverse racism. Back in the ‘80s, we laughed when White people said they were being discriminated against. Now we see their discrimination, and I think that every American has to fight against it,” stated Swain.

Please continue to check back with
BeThePeopleNews.com for more of Carol’s insights into education and her dedicated fight to help save the integrity of education in America. Be on the front lines with her as she continues to work every day toward a better America for all students.