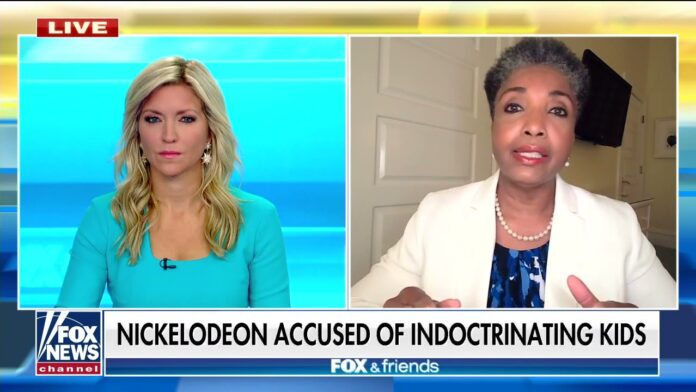 “[P]arents need to wake up and become more aware of what their children are being taught.”

According to Nickelodeon, even environmental issues are caused by systemic racism. The term for that, they explained, is “environmental racism.”

“I don’t think [parents] realize [that] children’s programming, whether we talk about cartoons or […] Sesame Street, […] have adults with progressive agendas who are not trying to educate your children,” said Dr. Swain. “They’re trying to indoctrinate them with ideas that come from the radical left in academia. They’re not content with destroying the lives of college students. Now they’re focused on K-12.”

In an hour-long Earth Day special episode, Nickelodeon told kids that systemic racism is evident in environmental issues like “Cancer Alley” in Louisiana and the air quality in New York.

Dr. Swain said these ideas are nothing new. She explained that she’s heard about them since the 1970s. Progressive left academics simply repackaged their thesis papers and lecture halls to fit into kid-friendly cartoons.

“I would say that Sesame Street and all of the children’s programming have become tools for the progressive left,” said Dr. Swain. “And as far as environmental racism, I started hearing about it in the 1970s in academia: it was in law schools, it was in graduate public policy schools.”

In the episode, Nickelodeon depicted one common cause behind a litany of complex environmental issues. According to Dr. Swain, that’s not education – it’s indoctrination.

“If you look at the conditions that were identified in the video, it’s far more complicated than that: there’s a whole field of land use and those decisions about where to locate plants have a lot to do with jobs as well as local economies and the cost of land. Those are factors,” asserted Dr. Swain.

Dr. Swain assessed that Nickelodeon’s content focus is littered with the hallmarks of critical race theory (CRT), which is rooted in Marxism.

She also pointed out that adults were puppeteering any kids featured in the episode.

Earhardt asked Dr. Swain what could be done.

“[P]arents need to wake up and become more aware of what their children are being taught,” asserted Dr. Swain.

https://forbesbooksaudio.com/episodes/e2-p1-dr-carol-swain/ Dr. Swain shares her journey from rural Virginia to becoming a professor & award-winning author, why she believes Bob Woodson is a national treasure,...
Read more