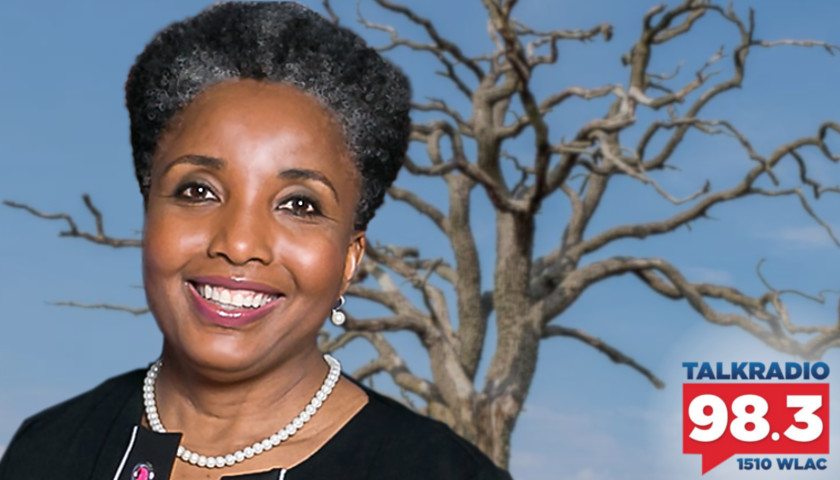 During this segment, Leahy puts on his genealogy hat and looks into Swain’s family tree.

Leahy: When you were here last time Carol we had an interesting conversation. As you know I’m a genealogy buff and I have an offer for you. And here’s the intro to that segment.

Leahy: So Carol, we’re going to talk a little bit about your family. And you’ve mentioned that there is a family legend that you are a descendant of possibly…

Leahy: To thee Thomas Jefferson. So putting together my genealogy detective tools. For relaxation other people do puzzles, I do genealogy. Go figure. But I find it very interesting. So you were the very first person on our program that I’ve offered this little detective work to.

Swain: I’d like to say to the listeners that I did not give Michael Patrick Leahy any information and he was able to dig up a lot of facts.

Leahy: Yes. A lot of facts. This is basically out there. All I do is I go on ancestry.com and then try to apply certain rules of logic and do a little research.

Swain: I didn’t give you my maiden name.

Leahy:  You did not. I found out what that is. (Swain chuckles) It’s out there in public records. And so we found your maiden name. So we’ll take this story to your great great grandmother. We know that you descend from a woman by the name of Edith Dicey Jefferson who was born in 1836 and died in 1921. Born in Bath County, Virginia. That’s in the western part of it right on the border with West Virginia. And then she died in Rockbridge County which is just south of it.

Swain: That’s where my grandmother was born.

Swain: They pronounced it Kye-Er.

Swain: Now was she a slave because on that side of the family…

Leahy: She was a slave. And we’ll tell you a little bit about that. And we know that because she appears in the Bureau of Freedmen’s records.

Swain: Already the old history is wrong because on that side of the family they say that they hail from a long line of free blacks.

Leahy: They may have been on one of the other sides of your family. But this particular one if you are in the freedman record. There’s a record of 1866 of your great-great-grandmother and great great grandfather. But here, is the rest of the story as they say. When she died in 1921 in Rockbridge County they list the name of the father and the mother.

But here’s the rest of the story. Bath County, this is where the detective stuff comes in. Bath County, very small. In 1850 in the census there was a census of slaves. So that would say who the owner is. Then the gender and age of the slaves that they owned. So ok, we know that Edith Dicey Jefferson was born in Bath County as well as Harry Green Kier.

Both are your great great grandparents. They got married. Well, they were in Bath County and they were slaves. We know that. So there are only 12 pages and about 50 families in the 1850 census of slave schedules. And if you look in that we can find out and I can pretty much tell you where I think your great-great-grandfather Harry Green Kier and his father and mother were.

So if you go to Bath County and you look at the 50 families that owned slaves you will see there is one family that owned a male slave age 45. A female slave age 40. And then male slaves ages 10 and 11. And then two male slaves age five. Dr. Thomas Goode. He owned 65 slaves. Probably your great great grandfather. And he was a proprietor of what was called Virginia Hot Springs which today is known as…The Homestead.

Leahy: So how about that. His descendants sold it to JP Morgan in the 1880s. And now it’s a big big resort owned by Omni. Now, what we don’t know, who was the Thomas Jefferson who was the father of your great great grandmother, Edith Dicey Jefferson? There are a couple of options. Could be the nephew of Thomas Jefferson. Thomas Jefferson had a younger brother who had a son named Thomas who lived in Charlottesville. That’s one. It could be a white guy.

It could be possible that there is a Thomas born to some records was born on Montecillo born to Thomas Jefferson and Sally Hemmings a slave according to some records. But not really backed by a lot. Could have been that person. Not even sure that a person existed. Or it could have been a slave that worked at Monticello or elsewhere in Virginia who took the name, Thomas Jefferson.

Swain: Now, why do you say you’re not sure that person existed?

Leahy: So there you go.

Leahy: Let’s play the end of that segment again here.

Leahy: So anyways Carol that’s our first episode of that and it will be a regular feature. As time goes on.

Swain: I like it better than the Bless Your Heart series.

Leahy: Do you? Well, we’re trying to make it funny.

Swain: Maybe because this one is about me. (Laughs)

Leahy: No I think that’s true. We’re going to resurrect the Bless Your Heart segment. It got kind of sidetracked from this coronavirus stuff. What about you?

Swain: I am too. And when it goes back to blacks and slaves, all of us in America pretty much have Caucasian ancestors. My grandfather could pass for white.

Leahy: That’s interesting. Way back I have one ancestor who was my only French-Huguenot ancestor in 1790 Captain Andres Bavier owned one black slave in New York back in 1790. That’s the only one I kind find in my heritage.

Swain: He was probably a household slave.

Listen to the second hour here: