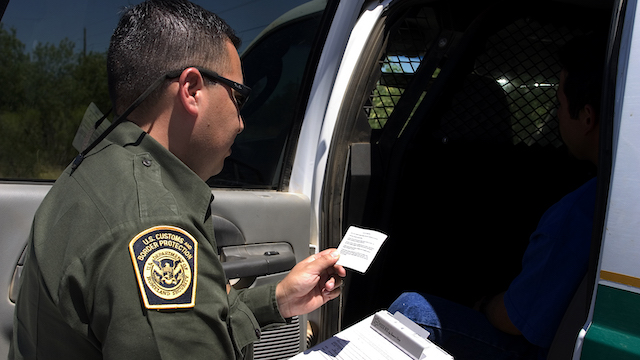 Immigration reform requires a political and social environment in which well-meaning individuals can speak honestly about the nature of the problem and its implications for American society. Unfortunately, that is not our world right now. Consequently, we are no closer to solving what has become a perennial problem.

America has not had a major immigration reform bill since 1986, when Congress passed the Immigration Reform and Control Act, which granted amnesty to an estimated 3 million people residing illegally in America. Estimates today range from 11 million to 22 million illegals, with the latter number provided by a 2018 Yale University mathematical modeling study.

Euphemisms are being used to deceive, obscure, and control America’s immigration debate.

The Oxford English Dictionary defines a euphemism as “a mild or indirect word or expression substituted for one considered to be too harsh or blunt when referring to something unpleasant or embarrassing.” Tremendous advantages are afforded the side most skilled in using language and the one with the larger platform for messaging.

The framing of the issue to affect public perception and response is central to the successful use of euphemisms in affecting public opinion. The Metaphor Project shows that the political left is adept at “framing” their issues in ways that connect with everyday Americans. Immigration advocates, to include the mainstream media, can shift public opinion by publishing front page, above-the-fold articles or airing news stories about “hardworking undocumented immigrants” cowering in fear behind locked doors.

We are told the “hardworking immigrants” only want a “pathway to citizenship.” The current thinking: The longer the illegal alien has been in the country working, the more deserving the person is of being allowed to stay. Legal immigration and the plight of those waiting to renew their legal visas or enter the country legally gets far less media attention than warranted.

On the political right, conservatives are more likely to use euphemisms such as “law and order,” “protecting our national sovereignty,” and “build the wall” to indicate support for controlling illegal migration.

To win the public relations battle, illegal aliens are now known as “unauthorized immigrants,” “undocumented workers,” and “unauthorized foreigners.” Many people just call them “immigrants.” The average American is justifiably confused by the blurring of distinctions and the moral overtones of how the issue is framed.

Alex Nowrasteh of the Cato Institute noted: “[Few] political debates are as riddled with euphemisms as immigration. The accurate legal term ‘illegal alien,’ which was once used without political bias … was replaced with ‘illegal immigrant,’ which was supplanted by ‘undocumented immigrant’ and, in rarer cases, ‘unauthorized immigrant.’”

According to Nowrasteh, euphemisms can sometimes make language harsher and less palatable: Birthright citizenship becomes a debate about “anchor babies.” This can work against the goals of reformers wishing to engage in an intellectual debate.

Often there is an effort to manipulate Christians by conflating the role of government with the biblical obligations individual Christians have when it comes to showing love for one’s neighbor and compassion for the less fortunate. In the area of immigration, the political left, who otherwise disdain Christianity and biblical values, liberally and slyly quote cherry-picked scriptures as part of their means-to-an-end politics.

It becomes irrelevant that America is not ancient Israel and that the government’s role has always been different than what the Bible requires of individual Christian believers.

The left regularly reminds us we are a nation of immigrants and a beacon of hope to the world. Indeed, we have the powerful symbolism of the Statue of Liberty with her well-known inscription: “Give me your tired, your poor, your huddled masses yearning to breathe free, the wretched refuse of your teeming shore.”

What is overlooked, however, is that Ellis Island was a port of entry for legal immigrants. Once it started regulating immigration in 1924, the U.S. government exercised the right to establish criteria about who could enter the nation and the conditions governing their presence.

We have reached the point that euphemisms and enforced language restrictions impede our ability to make needed reforms, because they restrict our ability to debate an issue of vital national importance in an open, honest exchange.

Conservative lawmakers are the ones most hampered by language restrictions enforced by organizations such as the Southern Poverty Law Center (SPLC): These lawmakers fear finding their names listed in HateWatch. No one wants to be labeled as a nativist, a xenophobe, or a bigot. That is exactly what can happen to anyone who regularly draws attention to the problem.

Just ask former CNN anchor Lou Dobbs about his experiences with the organization. Dobbs and numerous other conservatives were hounded relentlessly for drawing attention to the problem in the late 2000s. When Dobbs left CNN, the SPLC took credit for his departure.

One of Dobbs’s alleged mean-spirited actions was to make references to “illegal aliens.” Yet, under U.S. law, the foreign-born are classified as aliens. U.S. law defines an illegal alien as a person who “has entered the United States illegally and is deportable.” Or it could be a legal entrant who has overstayed a visa. Green-card holders are the only lawful permanent residents.

Nevertheless, many academics and watchdog agencies consider it mean-spirited to refer to persons in the country illegally as “illegal aliens.” The mainstream media contorts itself like a pretzel to ensure that its references to non-Christians and favored groups fit into the politically correct handbook filled with euphemisms and value-laden language that stand in the way of political reform.

We the People have a stake in good governance. We should insist on honest dialogue among policymakers in an environment that honors our free speech traditions.

Image: A U.S. Customs and Border Protection agent looks toward the ocean from within the Border Infrastructure System, a no man’s land area between the wall and fence separating California from Mexico on April 17, 2018 in San Diego, California. The way we talk about immigration affects public opinion and government policy.