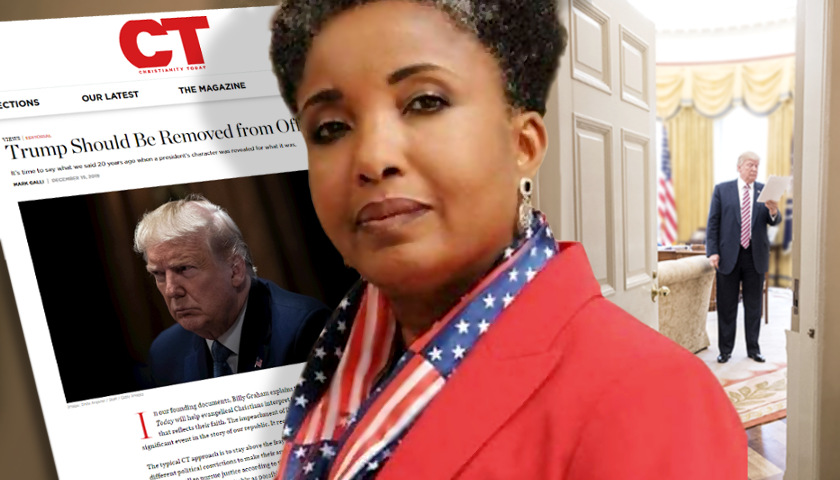 I first learned about Mark Galli’s Christianity Today editorial “Trump Should Be Removed from Office” from a text message sent by a former student of mine I’ll call Jared, a native New Yorker. He asked, What do you think of this article?

Galli argues that the grounds for impeachment are unambiguous. He says President Trump is morally unfit to hold public office because of the content of his tweets and his immoral behavior. His evangelical supporters, Galli proclaims, risk their Christian witness by standing behind a flawed and immoral man. However, he misinterprets the concluded impeachment hearings, omits the biblical requirements for political leadership, and ignores the interpretation of the Gospel that affords grace and forgiveness to every human being. That includes Donald Trump.

Here is Galli on impeachment:

” But the facts in this instance are unambiguous: The president of the United States attempted to use his political power to coerce a foreign leader to harass and discredit one of the president’s political opponents. That is not only a violation of the Constitution; more importantly, it is profoundly immoral.

What is shocking about Galli’s assertion, designed to persuade Christians to abandon the President, is the smugness of the unsupported assertions.

” . . . President Trump has abused his authority for personal gain and betrayed his constitutional oath. The impeachment hearings have illuminated the president’s moral deficiencies for all to see. . . None of the president’s positives can balance the moral and political danger we face under a leader of such grossly immoral character.

Galli’s arguments and tortured reasoning make one wonder whether he watched the hearings or bothered to read the short transcript of President Trump’s telephone call to the Ukrainian leader this past July.

In the article, Galli becomes the accuser of the brethren. His goal is to shame the evangelical supporters of the President by questioning their faith. He writes:

” To the many evangelicals who continue to support Mr. Trump in spite of his blackened moral record, we might say this: Remember who you are and whom you serve. Consider how your justification of Mr. Trump influences your witness to your Lord and Savior. Consider what an unbelieving world will say if you continue to brush off Mr. Trump’s immoral words and behavior in the cause of political expediency. If we don’t reverse course now, will anyone take anything we say about justice and righteousness with any seriousness for decades to come?

Galli’s attacks on Trump-loving evangelicals has made him the darling of the liberal Left. That is not a compliment. Galli invokes the stated goals of Christianity Today’s founding documents to help evangelical Christians “interpret the news in a manner that reflects their faith.” Yet, the article does not offer its Christian readers the scriptures or biblically-based guidance from which to evaluate the impeachment of the President or his moral failings. Instead, Galli just ‘wings it.’

A number of excellent responses to Galli’s article have been written, including from the likes of historian Jim Garlow, Franklin Graham, Pastor Jentezen Franklin, Everett Piper, Edward Bauer, and Dr. James Dobson. There is more to be said, though. Without repeating the main points of those respondents, I add a few scriptures and my take of the situation, which follow.

Read more of this commentary on The Tennessee Star – Click here

Previous articleNine Fruits: A Personal Journey from Corporate America to New Life in Christ
Next articleWars and Rumors of Wars