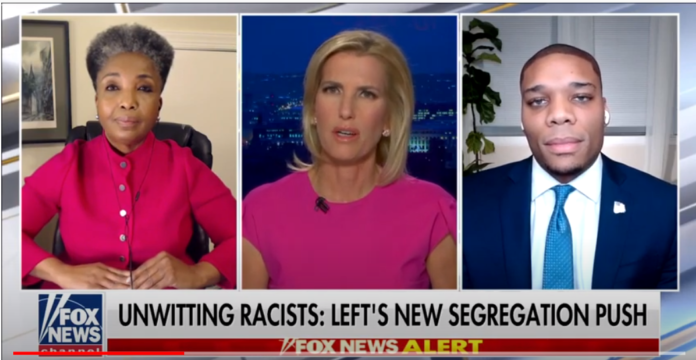 Dr. Carol Swain, founder of Be The People, appeared on Fox News on Tuesday with Laura Ingraham, to talk about the issues and deceitfulness of Critical Race Theory in public education, in the US Military, and in American churches.

Ingraham was interested in getting Dr. Swain’s expert reactions to the current nature of teachings and instructions under “Critical Race Theory” or “Equity”.

Ingraham opened up by asking Swain about her thoughts on segregation, which is the foundation of equity teachings, which is segregation color by skin color to teach people to view themselves differently.

“There has been segregation during activities for minority students on campus before, but I didn’t think we would accept it and reject the integration model and the national motto, E Pluribus Unum: out of many one, that is what is shocking to me,” Swain told Ingraham.

“And the segregation we see pushed by the Democrats and by the leftists, to me violates the entire civil rights vision and as well as civil rights laws, and it some causes the equal protection clause of the Constitution. Lawsuits are waiting to happen,” Swan continued.

Swain appeared on the show with Jeremey Hunt, a West Point Grad and a Veteran, who talked about the idea of a Chief Diversity Officer in the Army. “The word diversity might be cover to usher in progressive politics under Joe Biden,” Hunt said.

Swain and Hunt were asked to react to a video of a diversity training in a church setting where people were asked to be in white spaces to grapple with their whiteness.

“This is sad, and the Christian Church should be leading the way on race, and the very idea that they would turn to critical race theory and secular humanism, which is a rejection of God, is absurd,” Swain said.

“Critical Race Theory and the racist agenda of diversity and equity and inclusion is also infecting church, and many pastors have no idea what they dealing with because they get blown away by the code words of social justice,” Swain said.

Please subscribe continue to check back with BeThePeopleNews.com for more of Carol’s insights into education and her dedicated fight to help save the integrity of education in America. Be on the front lines with her, as she continues to work every day toward a better America for all students.

https://youtu.be/fPSYaRW7gEE Carol interviews 12-year-old Tyler McMurray about his decision to take a stand and speak against CRT being taught in his school.
Read more
Two-Minute Vignettes

Dr. Swain is host of the podcast Be The People on the America Out Loud Podcast Network. Passionate about empowering others to raise their voices in the public square, she is an author, public speaker, and political commentator.