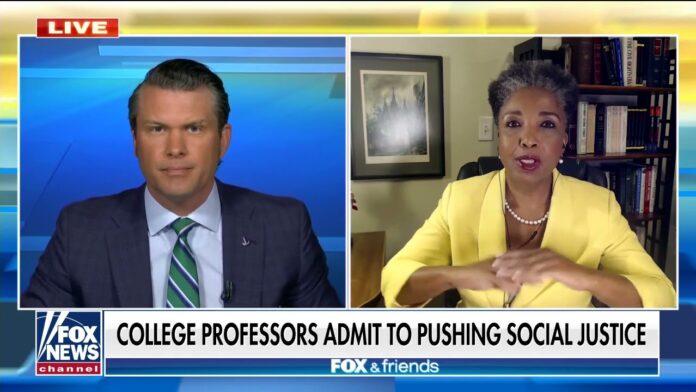 Dr. Carol Swain explained on Fox and Friends that Marxism’s hold in American classrooms has never been more evident than in a recent viral video: two college professors bragged about how they teach social justice rather than the expected curriculum.

The Illinois professors’ remarks were captured during a closed board of education meeting.

One of the attendees, Ralph Martire, chuckled about his students’ perplexity that he was teaching social justice philosophy rather than budgeting. Roosevelt University’s Masters Program in College of Arts and Sciences, where Martire teaches, costs around $947 per credit hour for their part time program and over $21,000 per academic year for their full time program – not including other fees and costs, like room and board.

“Yeah, I always flip out the kids that take my master’s class on fiscal policy and public budgets when the first three or four classes are devoted to philosophy of social justice,” said Martire. “They’re like, ‘Oh, man – Professor Martire, this is a really weird way to teach a budget!’”

Fox and Friends host Pete Hegseth asked Dr. Swain if these professors were examples of the mainstream practice in modern education.

Dr. Swain confirmed Hegseth’s observation. She explained that the National Education Association is “full of Marxists.”

“Marxism has seeped into the mainstream,” explained Dr. Swain. “It seeks to destroy the family and overthrow America as we know it.”

Dr. Swain said that communities should be educated about Marxism and social justice because those ideas have also manifested outside of schools, like in churches and corporations.

“First, they started in the college campuses. Now, it’s in the K-12 schools. I think it’s more important than ever before for us to encourage people to educate themselves about Marxism,” said Dr. Swain. “People need to know the history of Marxism and its connection to social justice and those concepts about equity that are being pounded into people’s heads all over America[.]”

Social justice curriculum runs afoul of civil rights, according to Dr. Swain. She said that those ideas are destructive and manipulative.

Hegseth also brought up how the Biden Administration is pushing to include The 1619 Project in history and civics education.

“There is growing acknowledgement of the importance of including, in the teaching and learning of our country’s history, both the consequences of slavery, and the significant contributions of Black Americans to our society,” stated the U.S. Department of Education (ED) proposal. “This acknowledgment is reflected, for example, in the New York Times’ landmark ‘1619 Project.’”

Historians on both sides of the political aisle condemned The 1619 Project, pointed out Dr. Swain.

“It divides people, it’s destructive. It itself is part of critical race theory and Marxism. We would be subsidizing the destruction of our nation by indoctrinating our children in falsehoods,” asserted Dr. Swain.

Swain encouraged people to comment on their opposition to the ED proposal by the deadline of May 19.