Swain’s Take: “Woke” Anti-Racist Curriculum is Bullying and Indoctrinating Children Under the Guise of Educational Equity 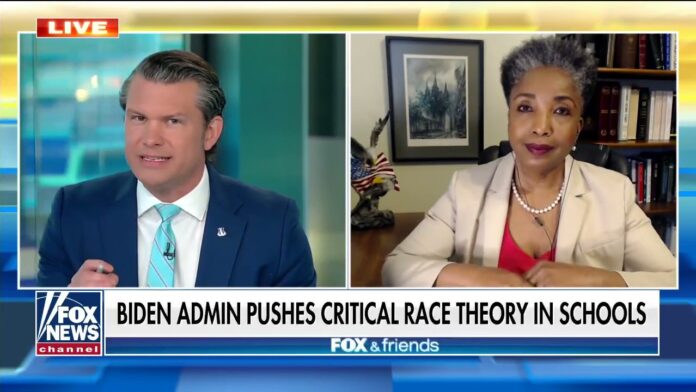 This week, Dr. Carol Swain unveiled on Fox and Friends what children endure through educational equity: bullying if they are white, forced victimhood if they aren’t, and indoctrination to view everything through a racial lens.

As a result, Dr. Swain said, schools are becoming hostile, intimidating environments. She predicted that homeschooling, or private schooling sans the equity programs, will soon become the last best form of education available.

Fox and Friends host Pete Hegseth asked Dr. Swain for her thoughts on the latest trend in education: parents waking up to the “woke” anti-racist curriculum.

Hegseth described one father who withdrew his daughter from the Brearley School, a private Manhattan school, over their politically-correct indoctrination disguised as education.

Hegseth asked Dr. Swain if anything could be done to fight these ideas.

Dr. Swain said that parents should be organizing and speaking out.

“Well, first of all, I can tell you that across the country people are pushing back,” said Dr. Swain. “I would encourage whistleblowers to step forward with your information because what has taken place is very dangerous. It has created a hostile environment for students as well as teachers and administrators. I know from firsthand experience: if you’re in an environment that feels hostile, you cannot be your best self.”

Critical race theory (CRT) is pushed as the undeniable truth of existence: that all sociopolitical structures are inherently, permanently racist against people of color. Hence, “systemic racism.” Dr. Swain argued that CRT is “pure indoctrination” because of its unfriendliness toward discourse.

“It’s not teaching young people how to think. In fact, it’s teaching the opposite because if they have questions and the questions are not politically correct, then they risk getting themselves into trouble,” explained Dr. Swain.

Hegseth asserted that fear of whistleblowers is why many teachers have asked parents to stay out of the room while virtual classes are underway.

Hegseth asked Dr. Swain if the increased numbers of whistleblowers could curtail “woke” curriculum. Swain said it likely would.

“When you point out that the learning environment is hostile and the environment for teachers – I mean, that’s running counter to Civil Rights laws. At least, when it comes to workplaces,” said Swain. “Teaching young children to hate themselves and their ancestry because of the color of their skin – I mean, that is not something we should be doing in America. We should not be shaming children, we should not be bullying them. We should not be creating intimidating environments. We are doing that under the guise of educational equity, and it’s very harmful to minority children because it teaches them that they are victims.”

Due to that, Dr. Swain asserted that CRT creates problems where none existed before.

As a new initiative under the Biden Administration, the Department of Education is proposing the launch of educational equity nationwide.

Dr. Swain assured Hegseth that the federal government wouldn’t mandate it, because mandates wouldn’t be necessary. She explained that the substantial federal grants would be enough for schools to adopt educational equity.

“We’re going to reach a point, Pete, where the only educated children in America are the homeschooled children and the ones in classical education programs in those few private schools where they have not allowed the nonsense in,” stated Dr. Swain.

Individuals interested in speaking out against the Biden Administration’s new educational initiatives should go online to the Federal Register and comment on the rule, per Dr. Swain.

https://forbesbooksaudio.com/episodes/e2-p1-dr-carol-swain/ Dr. Swain shares her journey from rural Virginia to becoming a professor & award-winning author, why she believes Bob Woodson is a national treasure,...
Read more