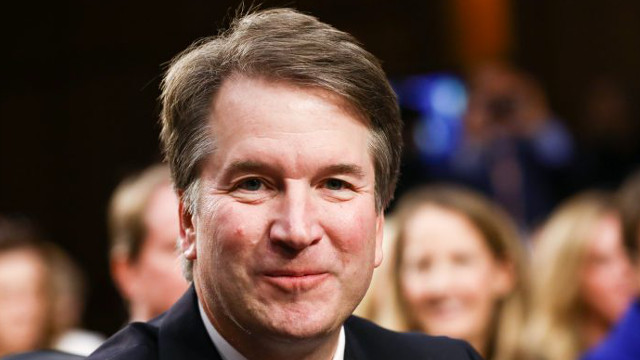 Why is Christine Blasey Ford being given an opportunity to testify before a Senate panel about her unsubstantiated smears against Supreme Court nominee Brett Kavanaugh? The answer is fairly simple: Our leaders lack the moral courage to say no.

Our leaders cater to the political left and the media narrative without applying common sense to the situation.

Although Ford lacks any evidence of a crime, since she is a woman, we must allow her to publicly dredge up and probably embellish a 36-year-old memory of an incident that Kavanaugh denies.

National Review’s Jim Geraghty sums up the case, or lack thereof: “Ford said she does not recall the date or the exact location, or ‘who owned the house or how she got there.’” Yet, we are supposed to believe her recollection of events and discount the denials of the accused who say the event never happened. We must humor Ford because she is a woman. She is a well-educated elite woman who would have no reason to lie (eye roll).

It doesn’t matter that she has no corroborating witnesses and never shared the story with anyone until 2012. By then, the Palo Alto psychology professor knew Kavanaugh was positioned to someday become a strong candidate for a Supreme Court nomination.

Ford had knowledge and ideological grounds to help set the stage for her 15 minutes of fame, in telling her husband and her therapist a version of the tale five years ago, when she described the incident as involving four boys. It would have been much harder to sustain the tale if, going forward, she pointed to four prominent men. No problem for Ford. She blames the inflation of the number of boys on her therapist.

Despite what would have been a harrowing experience, Ford never told anyone, including her parents. We are told she should be believed because she passed a lie detector test.  So, what? Lie detector tests are unreliable for assessing truth. Consequently, their results aren’t admissible in courts of law. The validity of a lie detector test can be negatively impacted by the examiner, the examinee, or the situation. A delusional person or a gifted liar can easily pass a lie detector test.

Call me skeptical, but I don’t believe Ford’s account, not for a single second. Nor do I believe the GOP should have delayed their confirmation vote to allow her to tell her unsubstantiated tale on national and international television. Her testimony can only smear Kavanaugh, who has no means to defend himself in the court of public opinion staffed and run by the liberal left media.

Giving Ford a Senate microphone makes absolutely no sense. The only purpose for her testimony is to damage and smear Kavanaugh. Democrats are hoping that Ford’s testimony will give cover to enough RINOS (Republicans in Name Only) to kill the nomination. Already, the usual suspects have lined up with Democrats: Sens. Susan Collins (R-Maine), Bob Corker (R-Tenn.), Lindsey Graham (R-S.C.), Jeff Flake (R-Ariz.), and so on.

I am a woman who has seen much over the past 64 years. This report doesn’t pass the smell test. There is no logical reason to believe women accusers are more truthful than their male targets. Why should we assume women are morally superior to men or that women should be believed and never questioned about their version of events.

Was Ford drinking at this party that no one else remembers? Treating women like delicate snowflakes provides a convenient shield for those who want to shirk responsibility for their own personal behavior or mental-health condition.

The Democrats seem to have an endless supply of women waiting in the wings to step forward with an accusation. In 2011, when Herman Cain was the front-running GOP candidate for the presidential nomination, several women accused him of sexual misconduct. After Cain suspended his campaign, his accusers faded back into the woodwork. Mission accomplished. Of the GOP candidates, Cain was the one who could have proven to be a substantial threat to Barack Obama.

More recently, the die was cast for unsubstantiated, decades-old allegations to wound and destroy when the GOP aligned itself with Democrat accusers against Judge Roy Moore. Moore had plenty of baggage unrelated to any sexual allegations, but he was likely to be elected until a series of women accused him of sexual misconduct related to dating teenagers during the time he was a single man.

To no one’s surprise, the one-sided discussion left out some key facts: teen girls dating and marrying older men was legal and the norm in many states; plus, Moore maintained he never dated a young woman without parental consent. It didn’t matter that, like Brett Kavanaugh, there were numerous women who swore Moore was always a gentleman.

Nine women who swore otherwise was enough to destroy his senatorial chances, even though such allegations hadn’t been made between 1992-2016, despite Moore having run and won office on several occasions during that time. It took the Democrats and Republicans to dethrone him. Moore is still fighting to clear his name.

The #MeToo women have proven to be filled with hypocrites and liars. Asia Argento, one of Harvey Weinstein’s female accusers and a #MeToo leader, carried on an affair with a teen male over whom she exerted power. Women who consented to have sex with men in exchange for promotions and benefits now bring forth decades-old allegations painting themselves as victims.

Some of these victims either lie or fail to put forth credible cases against the men they target. The accused men sometimes get their jobs back or prevail, despite the odds being against them. Ryan Lizza and Chris Hardwick are two high profile #MeToo victims who were reinstated after investigations found no reason to continue punishing them.

If Brett Kavanaugh becomes Supreme Court Justice Brett Kavanaugh, it will be a huge win for the American people, and the presumption of innocence that has characterized our American system of laws will have won the day.

Carol M. Swain is a former professor of political science and law at Vanderbilt University and a James Madison scholar at Princeton University. Her most recent book is “Debating Immigration: Second Edition” (2018).

Image:Judge Brett Kavanaugh testifies before the Senate Judiciary Committee during the first day of his confirmation hearing in Washington on Sept. 4, 2018. (Samira Bouaou/The Epoch Times)

Critical Race Theory is Just the Tip of the Iceberg

Can American parents prevail in the battle for the hearts, minds, and souls of their children? It is a question whose answer will be determined...
Read more
Blog

If the public had been largely unaware of the pervasiveness of critical race theory in America’s public schools, the shock waves of Virginia’s election...
Read more
Blog

The Madison County Republican Women’s group kicked off the first of their new speaker series event in October by welcoming Carol Swain, a former...
Read more