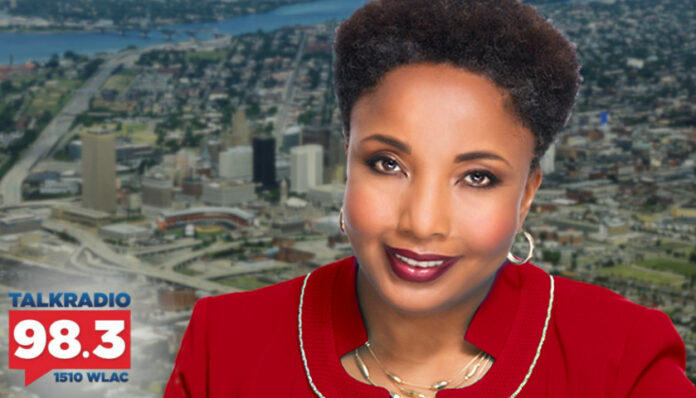 Live from Music Row Wednesday morning on The Tennessee Star Report with Michael Patrick Leahy – broadcast on Nashville’s Talk Radio 98.3 and 1510 WLAC weekdays from 5:00 a.m. to 8:00 a.m. – host Leahy welcomed all-star panelist Dr. Carol M. Swain to the newsmaker line to give her take on the Buffalo, New York, shooting that claimed 10 lives and injured three, with the majority of the victims being African American.

Swain: I’m headed to the D.C area for the Council on National Policy meeting.

Leahy: Oh, that’s a pretty big deal, and be safe in your travels. We wanted to talk about the mass shooting in Buffalo, New York, at a Tops grocery store. The suspect is an 18-year-old from a little town called Conklin, New York.

It’s in Broome County, which is where Binghamton, New York is. Payton Gendron, aged 18, allegedly drove three and a half hours up to Buffalo, a Tops grocery store, and shot and killed, I guess it’s now 13 people [update: 10 confirmed dead and three wounded as of this printing], in a mass shooting in the past couple of days.

Swain: First of all, we all know that the incident was horrific. But back in the late 1990s and early 2000s, there were several incidents like this that were happening across the country. And that is what inspired me to write my book, The New White Nationalism in America: Its Challenge to Integration.

And I looked at conditions that were converging at that point in time that I felt were creating a devil’s brew for racial unrest. And when you look at what’s taking place across the country, we focus on white supremacy, and the people that are pushing DEI and CRT and say that we need more of that [focus].

And I would argue that our leaders are creating these situations. They’re creating the situation because they’re not addressing the grievances and the policy concerns that people have.

The issues that were propelling that back then were concerned with the liberal immigration policies, globalization, loss of jobs, black crime, racial preferences, and several other issues. And at that time, the internet was getting big.

And I pointed out how the internet was making it possible for like-minded people to find each other. And in the particular case of this young man, what we find with hate crimes is that these people don’t belong to groups – like, you look at the KKK and neo-Nazi. KKK, probably not more than 2,000 people in the whole country.

These people are loners they inspired. The way to handle that is to address some of the grievances so that the people that push extremism are not able to reach our young people. And I argued in my book, we needed to move away from identity politics and multiculturalism.

Leahy: In this particular instance, as Payton Gendron, only 18 years old, looks like he became increasingly isolated from his friends, and here’s a little description of him from this is, now, an NBC News report. So take it with a grain of salt.

I’ll read a couple of paragraphs and then get your reaction. Matthew Casado, 19, said he and the suspect have known each other since childhood and he described their relationship as best friends for a large part of their lives.

They lost touch as they neared graduation from Susquehanna Valley High School. Casado said in a text message that Gendron reached out after graduation “about being lonely and about wanting to be around people.”

And then he got involved in … and he put out like what’s described as a 180-page racist diatribe online. It looks like this was a very troubled young man who, isolation and various information on the internet kind of put him off the deep end. Your thoughts, Carol?

Swain: That’s exactly the conditions that we had in the 1990s, and what I saw happen when President Obama got elected, what I saw with the Democrats, is that instead of trying to bring people together, they push the politics of division.

So we can focus on that young man and his hate crime, but some of the grievances that white people had back then, and that festered with people, is that there’s a double standard, that there are hate crimes being committed across America by racial and ethnic minorities against whites as well.

Those don’t get attention, and I think that some people feel these grievances and they can’t handle it. And I believe that if we wanted to bring Americans together, we would de-emphasize identity politics and multiculturalism and we would focus on the American national identity.

And I believe in this racial discussion that racial and ethnic minorities have a responsibility, too, to engage in certain kinds of behaviors and to reject other behaviors. And it can’t always be to focus on these atrocities and the victimization of minorities.

It’s a terrible thing, but these crimes are taking place across America. They don’t get the same attention if it’s, say, the victims are white.

And so I think that the racial double standards, moving away from identity politics, moving towards the American national identity, is how you would calm things down.

Listen to the interview: HERE

Previous articleThe Intellectuals – Interview With Dr. Carol Swain
Next articleCapitol Report (May 19): Carol Swain on Race and the Buffalo Shooting