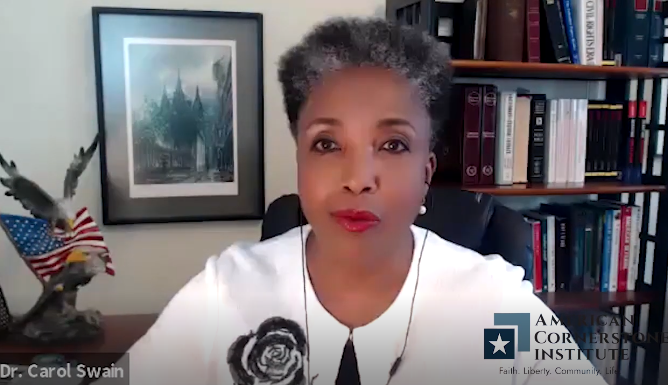 The two proved a compatible pair with unique insight on critical race theory. Both were born in the early 1950s, enduring and overcoming hardships and poverty in their childhood about a decade before the abolishment of Jim Crow laws.

“[T]he thing that really determines who a person is, as Dr. MLK emphasized so strongly – I suspect that he would be quite disappointed with critical race theory – it’s the character that makes a person, not the color of their skin,” said Dr. Carson. “Critical race theory turns that completely upside down and says that the color of their skin makes an enormous difference in terms of who you are and what you should think.”

In response, Dr. Swain reflected on her own experiences of becoming an outspoken opponent of critical race theory. She recounted the difficulties of her own beginnings and how she became a conservative. She was one of twelve children raised in rural poverty who dropped out of school after the 8th grade, got married at 16, and had three children by age 21. It was at that point that Dr. Swain got her high school equivalency and went to college, where she earned the first of five degrees.

“I enjoyed winning national prizes and getting lots of accolades, signing bonuses, until I became a converted Christian, [and] increasingly became more conservative,” said Dr. Swain. “But even when I was a Democrat, I had common sense, and I didn’t see the world the way other people around me saw the world, and so I was being called conservative back then.”

The idea of critical race theory has been in academia for a while, according to Dr. Swain. She shared that she’d heard about it while she was earning her degrees.

She explained further that it wasn’t until previous President Barack Obama came into office that she began noticing the impact of critical race theory. Due to this, Dr. Swain explained that she dedicated her last four years teaching at Vanderbilt University to discussing the impact of communism on America’s political life and culture.

“It was a class where I did not allow political correctness: it was a free-speech zone,” said Dr. Swain. “What I see taking place today with critical race theory, I believe it is the civil rights challenge of our time.”

Dr. Carson observed that widespread change is most effectively implemented through widespread dissatisfaction. He noted that the issue of racism

The Why Behind ‘Systemic Racism’ and Critical Race Theory

“I was born into systemic racism. I watched it crumble,” said Dr. Swain. “What I saw develop and evolve [after that] was a system of opportunities for people like me, and I can tell you many of my mentors – most – were white.”

Neither Dr. Swain or Dr. Carson alleged that racism hasn’t and doesn’t exist.

Dr. Carson recounted how he went from the bottom of his class to the top of his class in junior high school, simply by studying – and won the award for top academic performance. However, Dr. Carson said that one of the teachers chastised the white kids during the award ceremony.

“‘You are obviously not working hard enough,’” Dr. Carson recounted the teacher saying. “‘There is no way this young man, with all the hardships, should be number one.’”

“You have black admirals and generals, and CEOs of major corporations, Fortune 500 companies, universities. We have a black president, we have a black vice president,” said Dr. Carson. “I mean to sit there and say things haven’t dramatically changed – it’s a denial of reality.”

Dr. Swain responded that the unfortunate truth was that a lot of children believe in the teachings of critical race theory: that this country was built and runs for the benefit of white people.

“No longer are they saying that we want to achieve a colorblind society or achieve equal opportunity, they want to give up undeserved advantages to people because of the color of their skin,” said Dr. Swain.

Dr. Carson opined that people become like animals when they view everything through the lens of race because animals lack the capacity to see things like character and individuality. Rather, animals judge solely based on what they can visualize.

Dr. Carson remarked that he couldn’t imagine growing up a child in today’s world. Not only are they inhibited from seeing facial expressions due to masks, but they are told that they may be responsible for the deaths of the elderly in their lives or at risk of death themselves. On top of all that, Dr. Carson said, white children are told that they’re the cause of all societal problems and black children are told they will always be victims.

Dr. Carson cited the Brookings Institute research that discovered that finishing high school, getting a full-time job, and waiting until 21 to be married and have children would severely slash an individual’s likelihood of poverty. That research has become popularized as three rules or three norms.

Dr. Swain added that even if mistakes are made, this country’s wealth of opportunities allows for the possibility to turn your life around. She also noted black America’s resiliency, citing Black Wall Street – an African-American community that prospered greatly without government interference, until the Tulsa race massacre occurred.

“That’s the story we should focus on: the successes we have been able to achieve as Americans working together across color lines,” said Dr. Swain.

Racial tensions of some form have always existed. Dr. Carson explained slaveholders’ tactics of creating divisions among their slaves by encouraging groups of slaves to believe they were better than the other groups. Dr. Carson said that today, the differences of opinion are what causes these internal tensions.

“If there is systemic racism, it is on behalf of people who have very cleverly, ever since slavery, manipulated,” said Dr. Carson. “And now, in today’s society, [those manipulators make black people believe] you cannot agree with this black person if they have a different way of thinking. You know? Let’s keep the tension there, let’s keep the hatred there – and people keep falling for this stuff.”

Dr. Carson said that individuals need to be courageous in taking ownership of their life and speaking out against critical race theory.

“You don’t have to be a permanent victim. You can be a victor,” said Dr. Carson. “You can be somebody that inspires other people to do even better.”

In closing, Dr. Swain revealed that she is anticipating the release of her book, “Critical Race Theory: A Guide for the Perplexed,” around August 1.

“I don’t believe that the school systems who are pushing a race agenda and political activism instead of education – they are not on solid ground,” said Dr. Swain. “I think that if you stand on principle – just principles that you know – that you can get the upper hand.”