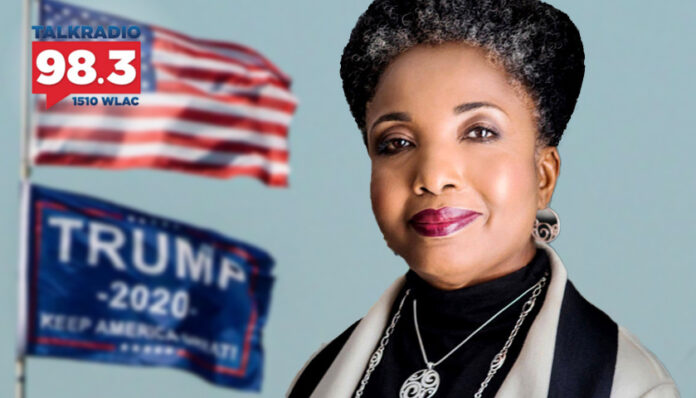 Henry: Welcome back, ladies and gentlemen. My name is Grant Henry. On the line with us right now we have an individual that needs no introduction in this area, but I’m going to make an introduction anyway because I’m just so fond of everything she’s ever done.

In 2011, she founded the Be the People Project to educate Americans about conservative values and principles. She’s the author of eleven books and is regularly published in major media outlets, as well as being featured in documentaries and television appearances.

Actually I just watched one of those documentaries recently. Dr. Carol Swain, thank you so much for joining us on the program this morning.

Henry: Let me start this by asking this here. I’ll read this headline. Today the Texas Public Policy Foundation announced that Dr. Carol Swain, a highly accomplished professor, formerly at Vanderbilt University and Princeton University, has joined the foundation as Distinguished Senior Fellow for Constitutional Studies.

Tell us a little bit about what that job is going to entail there at the Texas Public Policy Foundation.

Swain: The great thing about the job is that it enables me to do what I already do because part of my responsibilities are media op-eds, meeting with people, and also testifying before the legislature when it’s in session.

And so those are things that I’m well qualified to do. And what it will mean practically for my life is that I will not have to take as many speaking engagements. I have been totally self-employed.

Anyone who’s been self-employed knows that you put together a lot of things for your income. (Henry chuckles) And so it will relieve some of the pressure and will allow me to concentrate on writing and doing the things that I feel that God has called me to do. So the opportunity with TPPF was a godsend.

You’re a person that records voiceovers. You do a little bit of everything and anything. Kevin Roberts, he’s the CEO of the TPPF. He said this. We are thrilled to welcome Dr. Carol Swain to a distinguished senior fellow for constitutional studies.

She will provide a wealth of experience and institutional knowledge to our educational team, battling the toxic ideology of CRT and evaluating the importance of civic education just as she did on the 1776 Commission.

I want to ask you in particular about something he said. You and I know that critical race theory primarily started in law schools. But when Kevin Roberts talks about this idea of it being toxic in today’s culture, what do you think is most toxic about CRT?

Swain: Well, Grant, I have a whole book on it. My new book is Black Eye for America: How Critical Race Theory is Burning Down the House. And it’s a dangerous ideology. It’s a racist worldview that divides whites and minorities, and it runs counter to our civil rights laws, the Equal Protection Clause of the Constitution, and just human decency.

Only white people can liberate minorities. And then it says racism is permanent after it puts all the obligation on white people, it says it’s permanent. Meaning there’s nothing you can do about it.

And it treats minorities as substandard because it wants equity, not equal opportunity. It has rejected the whole notion of a colorblind society and assimilation. It wants equal outcomes. It lowers standards for math when it comes to minorities.

It says minorities don’t have to speak standard English. It says that getting to places on time, planning for the future law-abiding behavior, all the things that make for success, that that’s whiteness. How could you be more white supremacist than that?

I use that term in particular because I do believe that the longer we let this go on, the more it becomes pervasive in society, the fewer people understand it, the bigger of a problem we have.

How did the TPPF come to you with this initial proposal of bringing you as one of their distinguished senior fellows? Did you reach out to them? Did they reach out to you?

Swain: They reached out to me a couple of months ago, and I was so busy traveling all over the country, putting together things, and making a living. Let’s just say making a living. It took me a while to get back with them.

And when I saw what they were looking for, I did not think that it was something that I could do because I have so much of my own stuff going on. I have a new company called Unity Training Solutions that provides an alternative to DEI.

At the time I had my show, Conversations with Dr. Carol Swain. I was doing Two Minutes to Think About It with Bot Radio, and so I was busy with my own work. And so it took a while for us to have the conversation.

I thought about it, but it was very clear that they wanted me. And during my days in academia, when I was hot stuff before I became a Christian and a conservative, like if an institution or wanted you in fact, you didn’t apply for jobs.

You never applied for jobs. They had to come for you. I was good enough, along with other people in the Ivy League that people had to come to you. During my time in academia, I was never given the title of a distinguished professor, even though I was more distinguished, this is not very modest and Christian than many of my colleagues.

I’ve won the highest prize in my profession. I’d been cited by the Supreme Court three times. I was always treated as if I was the weakest link. And so it was a double honor to have the title Distinguished Senior Fellow for Constitutional Studies.

They approached me, and they made me an offer I couldn’t refuse. And to me, it’s a match made in heaven because it allows me to do what I’m good at.

That’s one of the things that Kevin Roberts said. And actually quoting you here during this interview, it says that for me, speaking as yourself, this opportunity comes in a suspicious time in life and of our nation.

We are teetering on the edge of a precipice. How much do you believe that the lack of understanding of civics, of just basic idea of the constitutional mechanics, how bills are made, what they’re meant to be done, and separation of powers.

How much of that lack of understanding plays into the idea of what you’re talking about is teetering on the edge of a precipice?

Swain: There’s a lot of things that play into it. And one is that there were some principles that America shared. I’m talking about values and principles that came from our Judeo Christian heritage.

And if you look at the Declaration of Independence, the Constitution, and just how a nation was formed, we have lost the principles and values that gave people courage and backbone.

And so one of the things that I try to model is the fact that we need to be educated about issues. We also need to be principled and willing to stand up and fight. Courage is something that I would like to see more of.

Unfortunately, I don’t see enough of it in the Democratic Party or the Republican Party. And because people are not steep in information about the founding, they have not read the Declaration of Independence or the Constitution and pondered those documents.

And I’m thinking members of Congress and some lawyers, you can go through law school now without really studying the Constitution or understanding what it means. We’re losing our nation.

And both political parties are guilty of not encouraging civic education or practicing it. And on the Republican side, I see a lot of followers. I don’t see leaders. I don’t see people that know how to think deeply.

Henry: One of the names of the books here is Black Eye for America: How Critical Race Theory is Burning Down the House? Let me ask a question pertaining a little bit more local here in the state of Tennessee.

When it comes to educating our children, Governor Lee and Penny Schwinn have come out recently and talked about the idea of maybe reconsidering this BEP funding formula, how we fund education from the top down.

I kind of want to just ask a generalized question in Americans for Prosperity, where I work, we tend to believe in sort of educational freedom that giving parents more choices as to how to educate their children with those tax dollars will prove beneficial.

In your opinion, though, what do you make of Governor Lee’s statement there? In your current role right now, how do we educate these children in the best, proper way?

Swain: I believe in parental choice. I think the parents need the resources to decide what’s best for their child. Some might choose public schools. They might choose one over another. Some would choose homeschool, and some would choose charter schools and private schools.

But the parents should be making those decisions. And Governor Lee can have all the prayer meetings he wants. And I believe in prayer and fasting. And just like a lot of people in Tennessee, we love God.

We are Christians. But at the end of the day, governors are supposed to lead. And there’s nothing about Governor Lee’s approach to education in Tennessee that inspires a lot of confidence on my part.

And so the fact that Penny Schwinn is still holding the position is very troubling. And the things that are happening in Williamson County and Davidson County and across the state despite the Legislature’s ban on CRT, we know that it’s still there.

Henry: Get the book Black Eye for America: How Critical Race Theory is Burning Down the House. Dr. Swain, thank you so much for joining us.

Article Published on The Tennessee Star