Immigration Dysfunction: Can Jeff Sessions Restore the Rule of Law in America? 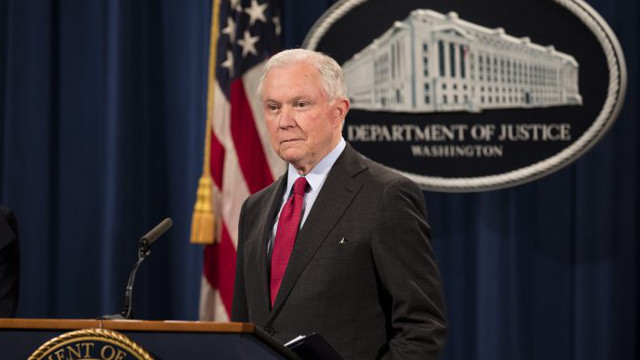 Attorney General Jeff Sessions, a long-term crusader for strict immigration enforcement, recognizes what has become a massive problem for our nation—and he’s had it up to here. He has directed a new class of federal judges to enforce the rule of law rather than succumb to the clever arguments of immigration lawyers seeking loopholes for their clients.

Sessions, it seems, wants to change the lax system of immigration enforcement that has characterized U.S. policy for decades. Unfortunately, members of Congress have a penchant for evading their constitutional duty “to establish a uniform Rule of Naturalization” as defined under Article 1, Section 8. As Nebraska Sen. Ben Sasse made clear in his dressing down of Congress at the Kavanaugh hearings, the American political system seems hopelessly broken, with Congress regularly shirking its responsibilities. Congressional leaders have perfected the arts of shirking and grandstanding.

Members of Congress are quick to agree the immigration system is broken, but the majority are reluctant to make meaningful changes. Instead of passing a comprehensive immigration bill that addresses major barriers for legal and illegal immigrants, Congress prefers to drag its feet and shift the problem to the executive branch. Americans, I believe, are weary of the career politicians who talk tough but vote and act like cowards.

One indication of this was the 2016 election of Donald J. Trump. Candidate Trump campaigned as an immigration restrictionist who vowed to protect American workers and citizens from criminal aliens and terrorists. Trump convinced voters that he would build a wall and send the bill to Mexico. Although the wall remains unbuilt, there is every reason to believe that Trump will continue to pursue avenues to deliver on the wall as well as other promises. After the midterm elections, reforming immigration is likely to become one of his No. 1 goals.

Meaningful immigration reform would be a historic achievement for any president given the divisive state of American politics. An inability to make substantive changes to immigration law has been a significant and sad part of the American story. In more than a century of squabbling about immigration policy, Congress has passed only three major legislative acts (the 1924 National Origins Quota Act, the 1965 Immigration and Nationality Act, and the 1986 Immigration and Reform Act). Other changes have been piecemeal. Congress seems to prefer piecemeal to comprehensive changes even though the problems are interconnected in a manner whereby a small change can produce many unanticipated and unwanted consequences.

Our congressional leaders drag their feet and cater to the whims of interest groups pulling and pushing them in different directions. Meanwhile, Americans and legal immigrants are left with an ever-expanding set of concerns. These include criminal alien behavior, national security weaknesses, outdated refugee and asylee policy, family reunification guidelines that some say no longer serve our interests, mixed-status families created by birthright citizenship, guest worker programs that often work against the needs of the nation and the workers, human trafficking, and birth tourism.

Congress needs to be held accountable for inaction that includes members of both parties. Trump should not have to bypass obstinate legislators to get substantive action in a policy area affecting millions of Americans and would-be immigrants from around the world. Unless we can change our laws, we will force the president to implement short-term change using executive actions and prosecutorial discretion. Far better that Congress make lasting substantive changes to our broken immigration laws.

A foot-dragging Congress was a major factor in President Barack Obama’s use of his pen to foist unwise decisions on us, such as his Department of Justice’s “catch and release” policy. Catch and release allowed the border patrol to apprehend and then release persons caught entering the United States illegally. Some of those previously apprehended foreigners kept trying until they successfully entered the United States.

Our policies and the refusal of leaders to follow the laws on the books created the crisis of unaccompanied minors surging into the United States during the waning years of the Obama administration. It also fed into the abuse and overuse of America’s refugee policy regarding amnesty.

The related problem of the child/parent separations created a brouhaha a few months ago when Attorney General Jeff Sessions enforced existing laws and applied a zero-tolerance policy that separated arrested adults from minor children. Although voices on the left and right cried foul, it has never been U.S. policy to put children into jail with their law-breaking parents.

Federal judges need to get back to following the laws on the books, and Congress needs to get to work reforming immigration. America is a nation of laws, as explained by the federal court system.

The rule of law is a principle under which all persons, institutions, and entities are accountable to laws that are publicly promulgated, equally enforced, independently adjudicated, and consistent with international human rights principles.

The rule of law is essential for civilized nations; it separates them from barbaric regimes that have little regard for human rights.

We the people must work together with our leaders to preserve our nation’s place in the world. We do this by holding our politicians and institutional leaders accountable for respecting and honoring timeless traditions and principles that have made America great.

Previous articleAbortion and the Progressive Campaign for Black Self-Annihilation
Next articleBlack Votes Count: President Trump and the Midterm Elections

Against All Odds Episode 36 – Safety in Public Schools