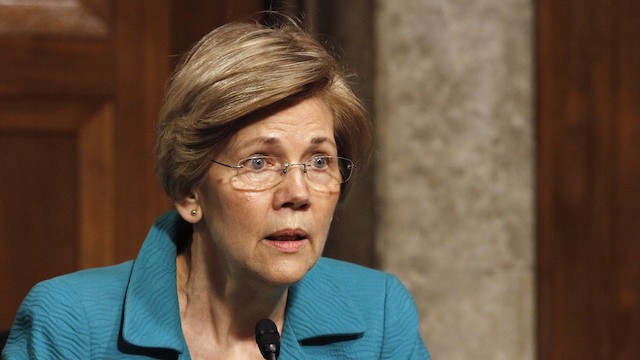 The left has created quite a conundrum for itself. As a consequence, it has no moral language to justify its condemnation of Sen. Elizabeth Warren (D-Mass.) for her decades-long decision to self-identify as a Native American.

The leftists we see on television, depicted in the form of Democratic Party spokespersons such as Sen. Corey Booker of New Jersey, and Sens. Diane Feinstein and Kamala Harris of California, see the world through a postmodernist lens. While secular humanists dismiss religion and believe in science, reason, objective truth, and freewill, postmodernists believe in everything; consequently, they believe in nothing.

Postmodernists see humans as social beings, shaped by a particular culture and times, operating in a world without objective realities, and moral constraints. While humanists believed man could eventually solve man’s problems through science and human ingenuity, the postmodernists reject such ridiculous pie-in-the-sky notions.

Their critique of modernism and theism have led them to believe that what some people see as human progress is merely the continuation of a dominant European worldview and set of privileges that lie at the root of the world’s problems (see Dennis McCallum’s 1996 book “The Death of Truth: Responding to Multiculturalism, the Rejection of Reason and the New Postmodern Diversity” for an understandable account of differences between modernism, postmodernism, and theism).

The left’s ability to police its own runs smack into a worldview where there are no absolute truths, race is a social construct, gender is fluid, science is useless, and individuals choose their sexual identity based on how they feel. Postmodernists believe the ends justify the means and that they can become creators by manipulating language and creating new realities and social constructs, overriding the ones they find dysfunctional for the world they hope to create by beating the rest of us into submission using any means necessary.

The postmodernist worldview hasn’t stopped some on the left from condemning Warren. In this instance, Warren isn’t being cut the same slack accorded to Rachel Dolezal, a white woman who passed as black until her parents outed her in 2015. When Dolezal was outed, she was serving as president of the NAACP chapter in Spokane, Washington. Although some people accused her of cultural appropriation, others defended her self-identity.

“Cultural appropriation is the adoption of certain elements from another culture without the consent of the people who belong to the culture,” according to ThoughtCo.

In the case of Dolezal, former MSNBC anchor Melissa Harris-Perry postulated, “Is it possible that she might actually be black? … Is there a different category of blackness that is about the achievement of blackness, despite one’s parentage?”

The postmodernist left allows and celebrates self-identity over DNA and X and Y chromosomes. By those standards, it shouldn’t matter that Warren’s DNA test stated she was between 1/64th and 1/1,032nd Colombian, Mexican or Peruvian, according to The Hill. Her self-identification was Cherokee-American. In genetic identification with Native Americans in the United States, she was between 0.1 and 1.5 percent.

Although the postmodernist left argues that a person can be whatever they see themselves as being, they reserve the right to create social constructs geared at punishing those they see as apostates from their cause. Therefore, a biologically black person can become white on the basis of their actions or beliefs. For example, black conservatives such as Kanye West and Candace Owens have been called white supremacists and dismissed as Uncle Toms and Aunt Janes, as has yours truly.

Their criteria for assessing truth claims are malleable depending on the circumstances. Therefore, a white person like Dolezal, who chose to join the black race and fight for the struggle, can be black because she acts and thinks like a liberal member of the group. On the other hand, Warren, a leftist who presents herself as fighting for the downtrodden, is lambasted because she doesn’t advance the progressive agenda of the postmodernist when it comes to the preferred race narrative, and she lacks Dolezal’s credibility with the group.

The postmodernist left needs to make up its mind about truth claims, science, and social constructs. Remember, truth is relative for them, and the existing power structures reflect European dominant values and principles. If the left, however, can accept Christine Blasey Ford’s “truth” about her alleged encounter with a teenaged Brett Kavanaugh while dismissing all evidence to the contrary, then surely its leaders can accept the DNA results that give Warren her 1/1,032 percent of native blood. I contend the left should accept Warren’s “truth” since their truth is relative.

There is a bigger problem posed by people such as Warren and Dolezal that hurts racial and ethnic minorities. It is the gaming of affirmative action programs by people who engage in ethnic fraud. Ethnic fraud occurs when someone who isn’t a member of the beneficiary group designates one’s self as a member for purposes of collecting a benefit.

There is reason to believe a lot of ethnic fraud does occur. No doubt this is soon to be followed by lots of sexual-identity fraud. The mushy system invites abuse. We don’t require DNA tests for individuals who self-identify as protected minorities, which now would include individuals who check one of the growing numbers of LGBTIAQ categories.

Warren is problematic because she allowed herself to be celebrated as a Native American achiever breaking records to become a first in many categories. Cheated out of that recognition was a Native American from the reservation or with enough documented native blood to obtain tribal papers. By all practical purposes, she gamed affirmative action and benefited from doing so.

Affirmative action was also an issue for Dolezal, who attended historically black Howard University and sued the university in 2002 for race-based discrimination. Dolezal accused the university of denying her “a teaching assistant job, further employment and a scholarship because she was white,” Politico reported in 2015. Her case was dismissed after the D.C. Court of Appeals upheld a lower court decision that ruled against her claims of racial discrimination. She was left with court costs.

When she applied for the NAACP position, she listed her race as “white, black, and American Indian.” It seems in the case of Dolezal, she decided if you can’t beat them, then join them. She literally joined the black race as a self-identifier with street cred.

Years ago, economist Thomas Sowell looked at preferential policies around the world (India, South Africa, Sri Lanka, Israel, Malaysia, Nigeria, and the United States) and concluded that whenever a government creates a benefit based on race or ethnicity, polarization ensues and the beneficiary class quickly expands beyond the known population size of the protected minorities (see Sowell’s 1990 book “Preferential Policies: An International Perspective”).

What we have with the left’s Warren conundrum is merely the tip of the iceberg. Oh, that we could only return to the modernist and the allowance it gave us for objective truth. We are now like the people of ancient Israel during the time of the Judges: Each man does what is right in his own eyes.

American laws, polluted by a nonsensical postmodernism soaked into the minds of several generations of college graduates, have left us without a reliable anchor.